You are here: Home / What is Autism? 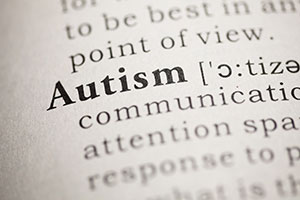 Autism is a disorder of neural development characterized by impaired social interaction and communication, and by restricted and repetitive behavior. These signs all begin before a child is three years old. Autism affects information processing in the brain by altering how nerve cells and their synapses connect and organize; how this occurs is not well understood. It is one of three recognized disorders in the autism spectrum (ASDs), the other two being Asperger syndrome, which lacks delays in cognitive development and language, and Pervasive Developmental Disorder-Not Otherwise Specified (commonly abbreviated as PDD-NOS), which is diagnosed when the full set of criteria for autism or Asperger syndrome are not met.

Autism has a strong genetic basis, although the genetics of autism are complex and it is unclear whether ASD is explained more by rare mutations, or by rare combinations of common genetic variants. In rare cases, autism is strongly associated with agents that cause birth defects. Controversies surround other proposed environmental causes, such as heavy metals, pesticides or childhood vaccines; the vaccine hypotheses are biologically implausible and lack convincing scientific evidence. The prevalence of autism is about 1–2 per 1,000 people worldwide; however, the Centers for Disease Control and Prevention (CDC) reports an approximate of 9 per 1,000 children in the United States are diagnosed with ASD. The number of people diagnosed with autism has increased dramatically since the 1980s, partly due to changes in diagnostic practice; the question of whether actual prevalence has increased is unresolved. Parents usually notice signs in the first two years of their child’s life. The signs usually develop gradually, but some autistic children first develop more normally and then regress. Although there is no known cure, early behavioral or cognitive intervention can help autistic children gain self-care, social, and communication skills. Not many children with autism live independently after reaching adulthood, though some become successful. An autistic culture has developed, with some individuals seeking a cure and others believing autism should be accepted as a difference and not treated as a disorder.

The ENDUE Foundation is committed to enriching the lives of individuals with developmental disabilities and autism, and supporting organizations who assist those individuals and their families.

Autism is a disorder of neural development characterized by impaired social interaction and communication, and by restricted and repetitive behavior. These signs all begin before a child is three years old. >Learn More